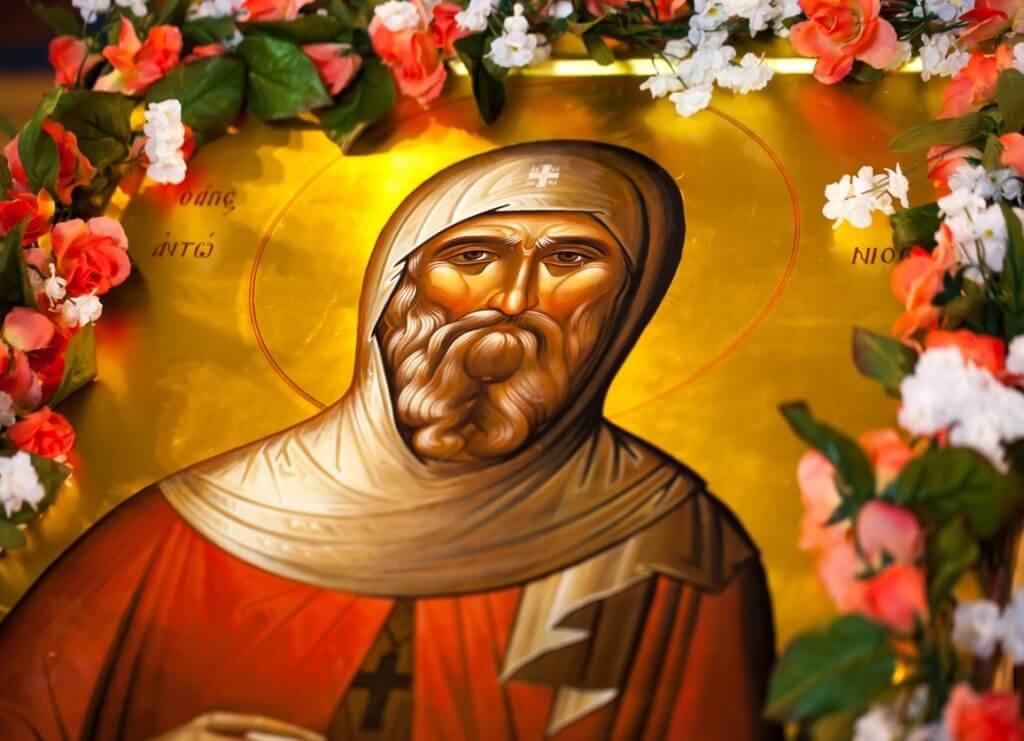 Saint Anthony, the Father of monks, was born in Egypt in 251 of pious parents who departed this life while he was yet young. On hearing the words of the Gospel: “If thou wilt be perfect, go and sell what thou hast, and give to the poor” (Matt. 19:21), he immediately put it into action. Distributing to the poor all he had, and fleeing from all the turmoil of the world, he departed to the desert. The manifold temptations he endured continually for the span of twenty years are incredible. His ascetic struggles by day and by night, whereby he mortified the uprisings of the passions and attained to the height of dispassion, surpass the bounds of nature; and the report of his deeds of virtue drew such a multitude to follow him that the desert was transformed into a city, while he became, so to speak, the governor, lawgiver, and master-trainer of all the citizens of this newly-formed city.

The cities of the world also enjoyed the fruit of his virtue. When the Christians were being persecuted and put to death under Maximinus in 312, he hastened to their aid and consolation. When the Church was troubled by the Arians, he went with zeal to Alexandria in 335 and struggled against them in behalf of Orthodoxy. During this time, by the grace of his words, he also turned many unbelievers to Christ.

Saint Anthony began his ascetic life outside his village of Coma in Upper Egypt, studying the ways of the ascetics and holy men there, and perfecting himself in the virtues of each until he surpassed them all. Desiring to increase his labors, he departed into the desert, and finding an abandoned fortress in the mountain, he made his dwelling in it, training himself in extreme fasting, unceasing prayer, and fierce conflicts with the demons. Here he remained, as mentioned above, about twenty years. Saint Athanasius the Great, who knew him personally and wrote his life, says that he came forth from that fortress “initiated in the mysteries and filled with the Spirit of God.” Afterwards, because of the press of the faithful, who deprived him of his solitude, he was enlightened by God to journey with certain Bedouins, until he came to a mountain in the desert near the Red Sea, where he passed the remaining part of his life.

Saint Athanasius says of him that

“his countenance had a great and wonderful grace. This gift also he had from the Saviour. For if he were present in a great company of monks, and any one who did not know him previously wished to see him, immediately coming forward he passed by the rest, and hurried to Anthony, as though attracted by his appearance. Yet neither in height nor breadth was he conspicuous above others, but in the serenity of his manner and the purity of his soul.”

So Passing his life, and becoming an example of virtue and a rule for monastics, he reposed on January 17 in the year 356, having lived altogether some 105 years.

Apolytikion in the Fourth Tone

Emulating the ways of Elias the zealot, * and following the straight paths of the baptist O Father Anthony, * you made of the wilderness a city; * and did support the world by casino på nätet your prayers. * Wherefore intercede with Christ our God * that our souls be saved.

Kontakion in the Second Tone

Forsaking the uproars of life O venerable one, you completed your life in quiet, fully imitating the Baptist. Therefore, we honor you with him, O Anthony, Father of Fathers.