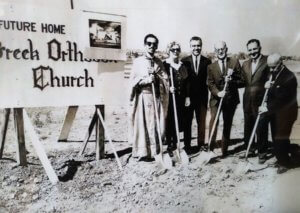 Groundbreaking in 1964 and an audio recording from one of the first services held at Saint Anthony at Pascha in 1965.

Eastern Orthodox Christians have been in Northern Nevada since the late 1800’s, coming to work in the copper mining industry. Greeks have probably been in the Reno area since the early 1900’s. Visiting priests from all over the West and many Orthodox jurisdictions would come or “stop by” to celebrate the Divine Liturgy, marry couples, or baptize children. When deaths occurred, a Priest was called in to conduct the Funeral services. In the early years of the Parish, the “Knights of Pythias” hall was used for Divine Liturgies. For weddings and baptisms, Trinity Episcopal Church was used. Funerals were usually conducted in the chapels of the funeral homes.

Around the year 1960, the AHEPA (American Hellenic Educational Progressive Association) had purchased a one acre parcel of land in southwest Reno (which was eventually to become one of the most prestigious areas of Reno) to build an AHEPA hall. The AHEPA gave the land to establish a Greek Orthodox community. Shortly thereafter, a church building and small hall were built and the Greek Orthodox Church of Reno became a reality. Because, at that time, there was no Diocesan architectural committee and because funds were limited, an “A” frame style of church was built. This came to fruition because a handful of dedicated Greek Orthodox Christians were willing to financially extend themselves and sacrifice in order to build the Church and small hall as it stands today. The church received her name from the late Pete Cladianos Sr., who chose the name Saint Anthony, the patron saint of his beloved wife, Antonia. The church seats approximately 200 people.

Approximately 15 years later, another 1 acre parcel of land was acquired. But in 1980, a small fire occurred in the small hall and it blackened the church and hall. Fortunately, neither the church nor the hall were destroyed, although a great deal of smoke damage took place. This fire caused everyone to work for a new large hall, which was built in 1982 and dedicated in 1983. It must be noted that at that time, Bishop Anthony of blessed memory, was extremely instrumental in helping the Saint Anthony Parish deal with the insurance situation. With his blessing, the large 6400 square foot hall ultimately became a reality, and was dedicated to the memory of Pete Cladianos Sr. in January of 1983.

Parishioners of Saint Anthony have distinguished themselves in all professions, businesses, the education field and in all aspects of life in the Greater Reno, Sparks and Carson City area. As with most other parishes of the Metropolis, Saint Anthony Parish holds an annual Greek Festival on the church grounds, with over 4000 attendees each year.

Over the years, Saint Anthony has been served by four full time Priests. The first full time priest of the Parish was Fr. John Merkouris, who remained with the parish until 1971. Fr. George Bratiotis served the parish from 1971 through 1974. Fr. John Kallimanis served from 1974 through 1980, and again Fr. George Bratiotis, served from 1980 through 2010, having recently retired. The current priest is Fr. Stephen Karcher.

Myron the Martyr of Cyzicus

Demetrios the New, Righteous-Martyr of Samaria

Paul, Juliana, and those martyred with them (the executioners)