The disciples ‘rejoiced when they saw the Lord’ [John 20:20]. Their joy however was not psychological, but spiritual and lifted up their spirit to Heaven. He filled them with his peace, with delight, but even more than that, he filled them with His own life, as ‘he breathed on them, and sa 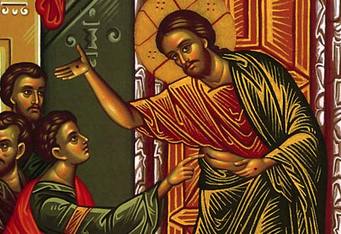 ith unto them, Receive ye the Holy Ghost’ [See John 20:22]. This act of the Lord brings to our mind the awesome moment of man’s creation, when ‘God formed man of the dust of the ground, and breathed into his nostrils the breath of life; and man became a living soul’ [Gen. 2:7]. Through His breath, God gave life to His creature ‘according to His image and likeness’, in a similar way Christ now breathes in the faces of the disciples, refashioning them and imparting the Spirit of eternal life.

Through His word, ‘Receive ye the Holy Ghost’, He inaugurated a new creation. In His breath, He imparted the first dispensation of the Holy Spirit that would heal and strengthen their nature, so it would be able to bear the grace of the Comforter on the day of Pentecost, the fulness of divine love. If man’s nature is not strengthened, it cannot bear anything heavenly. ‘The natural man receiveth not the things of the Spirit of God’ [1 Cor. 2:14]. The disciples received the anointing of grace during the appearances of the Risen Lord. Their hearts received the earnest of the Spirit [See 2 Cor. 1:21-22 and 5:5; Eph. 1:13-14] that would refashion them into apostolic hearts, which ‘drew all the world into their net’ [See Apolytikion of Pentecost]. The ‘little flock’ [Luke 12:32] that was gathered together ‘for fear of the Jews’, was transfigured into a hidden leaven, that would soon leaven the whole lump, that is, all the world unto the ages of ages.

Fathers of the 1st Council

Aquilina the Martyr of Syria

Triphyllos the Bishop of Nicosia