The Apostle Peter, who witnessed the Lord’s Transfiguration, writes: We did not follow cleverly devised myths when we made known to you the power and coming of our Lord Jesus Christ, but we were eyewitnesses of his majesty. For when he received honor and glory from God the Father … we were with him on the holy mountain. Divine power has granted to us all things through the knowledge of him who called us by his own glory and virtue… that through these you may become partakers of the divine nature, having escaped from the corruption that is in the world. 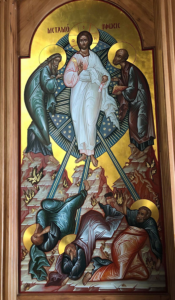 The Apostle John, who also witnessed the Lord’s Transfiguration, writes: In the beginning was the Word, and the Word was with God, and the Word was God… in him was life, and the life was the light of men. The light shines in the darkness, and the darkness hasn’t overcome it. The Word became flesh and lived among us. We saw his glory, such glory as of the one and only Son of the Father, full of grace and truth. We have seen and testify that the Father has sent the Son as the Savior of the world. That which was from the beginning, that which we have heard, that which we have seen with our eyes, that which we saw, and our hands touched, concerning the Word of life …This is the message which we have heard from him and announce to you, that God is light, and in him is no darkness at all.

Divine Liturgy for the feast of the Holy Transfiguration will be on Thursday, August 6 at 9am. Blessing of grapes & fruit to follow.

David the Righteous of Thessalonika